In my previous two blogs, there’s been a high emphasis on the science and technical parameters of competition prep using velocity based training. In this final installment in the series, I’d like to take a little less look at the science and a little more in-depth look at the art that velocity parameters allow coaches to use. Anybody who has coached the Olympic lifts for any extended period of time knows there is a little bit of intuition involved in programming. This is especially true as the coach’s athlete gets closer and closer to competition. The better a coach knows their athletes, the better they see their movement and understand what’s going on in their bodies, and the better they are able to mitigate their training for the best success. Here’s where I ran into a little bit of a problem in this prep cycle. We have a new lifter, recruited by USA weightlifting from Baylor’s acrobatics and tumbling program. Her name is Shayla Moore and her potential for success in this sport is massive. That said, she has competed in absolutely zero National Competitions and in only one qualifying to qualify her for Las Vegas. Furthermore, the one meet she did compete in we did not taper or slow her preparation at all. I knew she could hit the necessary numbers regardless. 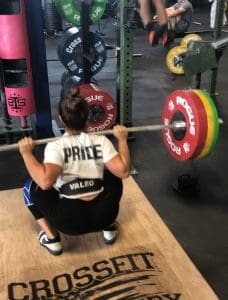 This is where things get tricky for me as a coach. I don’t have the years of experience watching and coaching Shayla that I do Jessie and Jourdan. Furthermore, this is her first time ever completing a preparatory taper for a major competition. I have no idea how she’s going to react nor do I have any idea what I should be looking for as she gets closer and closer to competition. Furthermore, because she is so new most of her work up to this point has been strength building and technical precision. She’s been working timing in different positions and really working her brain’s systemic understanding of what happens during snatch and clean and jerk. All that to say she doesn’t know how fast the bar should be moving and she doesn’t necessarily know what her top and speed is. For that matter, neither do I.

This is where the art comes in. I watched some of her tumbling passes and have seen her perform simple movements like a countermovement jump and a basic squat jump. I know her ability to produce power. I know how much capacity she has for creating speed. Yet, I didn’t necessarily see that speed carrying over to the barbell. This is where we were able to insert some Velocity Based Training. I had her watch the speed at which Jessie or Jourdan did pulling or power movements or squatting and then I put that same velocity unit on her barbell. She immediately saw how much slower she was then they were. Obviously, there’s going to be some difference because of physiological make up but not the gap she saw. In some regard, she was moving a full meter per second slower than her training partners.

For Shayla, knowledge is power. Just knowing she was not moving fast enough helped her to move faster. Furthermore, she had immediate feedback when she did move fast so she could remember and train at that speed. Having an iPad sit in front of her on every squat and every pull for the last four weeks has helped her to see what causes the body to move fast and what slows the bar down. It helps her body remember the movement process that creates the type of bar speed we are looking for. Furthermore, it helped her body forget the types of movement technical errors that slow the bar down. I don’t necessarily know the top end speed for Shayla in the squats and the pulls on the lifts. Where velocity training was super helpful in her preparation was her ability to get immediate feedback on when she was moving slow and when she was moving fast, because she didn’t know how to feel the difference. 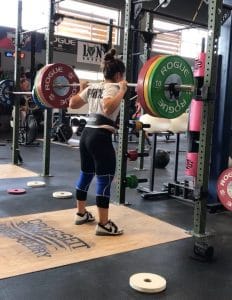 This data over the last four weeks has been more valuable than anything else we’ve done with her. I wish I could express in words how this has transformed her lifts. The stimulus alone has made everything faster for her. Furthermore, the physiological carryover of firing her fast twitch muscle fibers at higher contractile rates more regularly has had a massive impact on the numbers she is able to lift. Before applying some of the velocity based training concepts to her barbell, I was clueless as what to expect from her in Vegas. Now, it wouldn’t surprise me to watch Shayla snag a 30 kg total PR.

If you have new lifters and you don’t have the experience or repetition count with them that you do with some others, I would urge you to start measuring their velocity. You might find that an easy way to help them prep for competition is just making them move the bar faster. Your lifter might find that they were moving slow and had no idea. A little bit of this is intuition as a good coach can see when a bar is moving slow in an athlete they have experience with. However, with a new athlete, this can be much harder to know and see.